Maybe this is really dorky to say – but I really like recycling. I still remember when we were introduced to the phrase “Reduce, Re-use, and Recycle” in elementary school. It made so much sense to me, I didn’t know why anyone would not recycle. It was the mid-80’s and I think that was the beginning of the big recycling “push”. Well, it must have worked for me, because I have been recycling ever since. I went home and talked to my parents about recycling and we started recycling paper and other “easy” things like milk jugs and pop bottles. In Michigan, where I grew up, the have a 10 cent deposit on all pop (and I think alcohol) cans and bottles. Basically when you buy a bottle of pop, it costs 10 cents more than it would in Indiana, but if you take the bottle back to the store to be recycled you get 10 cents back. As kids, my parents would let my sisters and I keep the money that we got from recycling pop cans, so I always wanted to collect as many cans as I could. I did not however go so far as to do what I often see people doing when I am back up in Michigan, searching through trash bins and dumpsters to find discarded pop cans, just to get the 10 cents back.

When I got to college in Illinois, I could not fathom that people would throw pop cans and bottles in the trash. We had both trash bins and recycling bins in our dorm rooms, and I always tried to use the recycling bin as much as possible. The one nice thing about Illinois though, or at least the Chicagoland area, is that all recycling is free, but you have to pay PER BAG of trash that you throw away. This never applied to me, as I never lived in a house where I had to pay for my own trash, but for 2 years while Jer and I were dating he lived in a house and he and the guys he lived with always tried to recycle as much as they possible could (even probably some things that were not recyclable), simply because they didn’t have to pay for it. I think that is a great way to get people recycling though. Otherwise, how likely would it be that a bunch of guys just out of college would think about recycling anything?

Now that we have our own home, Jer and I continue to recycle. Even though we have to pay for recycling here, it is much cheaper than trash collection, and it is worth it to me to pay to recycle. Our county recently changed companies to handle our recycling and I’m super excited because we got these enormous recycling containers – they are as big, if not bigger than our big trash can. And the best part about it is that it has wheels so you can roll it out to the curb. Today was the first day that we got to use these new containers. Jer left this morning for work and was running a little late and forgot to put the recycling out at the curb. 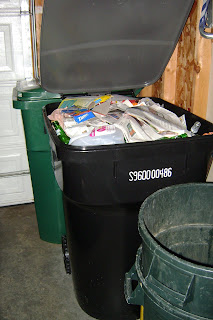 He called to ask me if I could do it – normally this would be something that I dread – dragging all the multiple, heavy different receptacles that we used to use for recycling down to the curb is not my idea of a fun time. But this morning, it was so easy, I just rolled my big ole can down to the curb, and it was done. And I am proud to say that our container was completely full. Just to show how dorky I am – I’m posting a picture of my completely full new recycling container that I am so excited about. Go ahead and laugh – at least I’m doing my part – what about you?