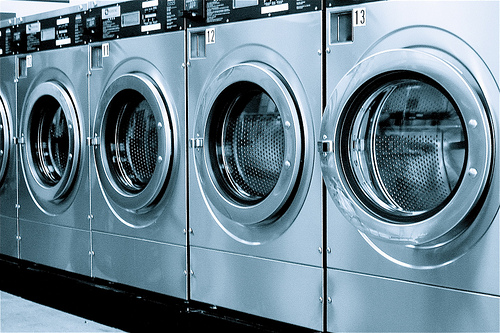 I’m starting a new monthly series here at Live Renewed – Frequently Asked Questions – FAQs. I often get asked similar questions from friends, family, and people who are learning about going green, or know what my blog is about and ask me about it.  Also, I really want to hear from you guys, my readers, what you have questions about, or want to know or learn more about.

To start things off, since we’ve been talking some about reducing our disposables this month (except, oops, I haven’t done my garbage inventory yet, just been busy, so the results of that will have to wait until next month – sorry about that!),  I wanted to answer a question about using re-usable products like kitchen and cleaning cloths and cloth diapers that have to be washed after every use, instead of using disposable products.

FAQ: What about the amount of water needed, and energy used, to wash and dry reusable cloths and diapers? Doesn’t it use just as much energy and resources as using disposables? Are reusable products really better for the environment than disposable?

I want to start by saying that this is a valid question.  I think sometimes people who use disposable products are legitimately wondering about this. They might think those of us who use reusable products believe it doesn’t have any kind of impact on the environment. Also, I think this is a question that paper towel and disposable diaper manufacturers have placed in people’s minds as a way to market their own products.

It’s not that most re-usable products are without any kind of environmental impact – but it is a different kind of impact. So I believe the underlying question here is which option has the most harmful and longer lasting impact on the environment – using energy to wash and re-use items like cloth rags and towels and cloth diapers, or using one-use disposable products like paper towels and diapers?

A: First, let’s think about this issue of reusable versus disposable from another angle.

No one would claim that we should all use one-use, disposable, paper clothing, wear them once and throw them away because that would be better for the environment than having clothes that we wear more than once and have to wash in between.

Also, I don’t think anyone would argue that everyone should just eat off of disposable paper plates and with disposable plastic silverware because that would be better for the environment than using energy and water to wash and reuse dishes after ever meal.  Am I right?

So then why would we question the use of reusable cloths and diapers and think that it’s better for the environment to use disposable products instead?

So part of my reply is kind of tongue in cheek – then we should all start wearing disposable paper clothing and using disposables plates and silverware because it uses too much energy to wash and dry and reuse those things day after day and we should just switch to disposable and be easier on the environment.  Right?

Next, the other problem with this question is that it doesn’t take into account the whole system of reusable versus disposable.

It’s just looking at a single paper towel and saying, “It’s not that big of deal, paper towels are small, they don’t take up much space in the garbage, and they will decompose quickly anyway.”

But, that is only looking at the effects of the disposal of a paper towel on the environment. Paper towels don’t just appear out of thin air – they have their own environmental impacts of extraction, production, transportation, and packaging, as well as disposal.  The final remains of a paper towel is not the total picture of it’s impact.

Disposable diapers are a little bit different because most people realize that they aren’t just going to decompose in a landfill.  Most estimates I have heard are that they take 500 years to decompose.  But yet, I still hear the same argument, that washing and reusing cloth diapers is just as bad for the environment as using disposables.

The amount of resources that go into producing disposable paper products must be taken into account. Most paper towels and disposable diapers are made from virgin wood pulp, meaning they are made from freshly cut trees. The wood pulp and paper industry also use large amounts of water in the production of their products.

Most paper products are whitened with bleached with chlorine, a process that release dioxins (some of the most toxic chemicals), into the environment.  And disposable diapers have other added chemicals and plastics to make them absorbent and waterproof.  The products then have to packaged and shipped to the stores where they are sold, using fuel and creating air pollution.  And the real problem with all of this is that it doesn’t just happen one time, it happens over and over and over because these products are disposable, and new ones have to be made every day because the ones we used yesterday are already in the trash.

Okay, obviously I think you can probably tell that I feel pretty strongly about this, and I haven’t even talked about the impact that reusable products do have on the environment, and ways to reduce that impact as much as possible. Just writing this post has made me realize that there is more that I want to talk about on this issue, so I’ll probably be coming back to it again in future posts.

I do want to say that I’m not mad that people use paper towels or disposable diapers, or think that you’re a terrible person if you do (remember we use disposable diapers part-time at my house too), I just want there to be a fair discussion about it. I feel like paper towel and disposable diaper manufacturers have done a good job of “marketing” their products by minimizing their impact on the environment, and making it out to be “equal” to the impact of their reusable counterparts, during a time when more and more people are becoming aware of and concerned about the environmental impact of their choices.

For me, the issue is more about reusable versus disposable products overall, not just paper towels and disposable diapers, and which is the more environmentally responsible choice – which has the least overall impact on the environment? I think that it’s time to move towards reusable products in all aspects of life and not just those that are cultural norm.

So to sum it all up, my quick answer to this question would be:  Yes, there is energy used in washing and drying reusable products like cloth rags and cloth diapers, but that doesn’t stop us from using other reusable items like clothing, dishes and silverware, even reusable water bottles.  We have to look beyond just the impact of disposable items in the landfill, and see the total picture of their extraction and production, packaging and transportation, as well as disposal, and decide which we think has a greater overall negative impact on the environment – cloth products that are produced one time and then can be washed in our homes and reused again, or disposable products that are industrially produced and must be produced over and over again in order to use them?

What would your answer to this question be?  How do you look at the issue of reusable versus disposable products?