This is Week 3 of the Simplify the Season series.

Happy Monday! I hope everyone had an awesome Thanksgiving weekend celebrating with your loved ones! I also hope that your weekend wasn’t too overtaken by the crazy consumerism of Black Friday!

I was really surprised on the first week of the Simplify the Season series when I ran the giveaway for A Simpler Season that so many of you said that your biggest struggle during the Holidays is simplifying your gift giving. I guess as our family has walked away, over the past few years, from the over-spending and over-giving of our previous Christmases, (mostly because of living on such a tight budget, not because we’re saints or something) that I almost forget what a strong pull our consumerist culture has over this season.

As I said, we live on such a tight budget that we simply don’t have the option of going crazy and buying tons of gifts and over-spending for Christmas. It wasn’t something that was an intentional choice at first, it was out of necessity due to our financial situation, but now, even if we had the means to buy tons of presents for our kids and each other, we would still choose to keep our Christmas simple and Christ focused. What we have learned through our situation, is that we are so much happier with fewer, more intentional gifts, and we are able to devote most of our time during this season focusing on the True meaning of Christmas.

So, I’m thinking that for the remainder of the Simplify the Season series, we’re going to talk about ways that we can simplify our gift giving so that we can purposefully move away from the pull that our consumer culture has over this season and give it back to the One who is the Greatest Gift the world has ever received. Can you get on board with that, with me?

A Different Way of Doing Christmas

I read a post over the weekend, The Christmas Conundrum at Jen Hatmaker’s blog, and I want to strongly, strongly urge you to head over there and read the post because it is so good, and so much better at saying some of the many things that I have in my head, but have trouble putting into words.

Read the post, and then I’ll tell you a little bit about what we do for our family. It is a long post, so if you click over to read it and don’t come back to finish this post, I’m okay with that – it’s that good. 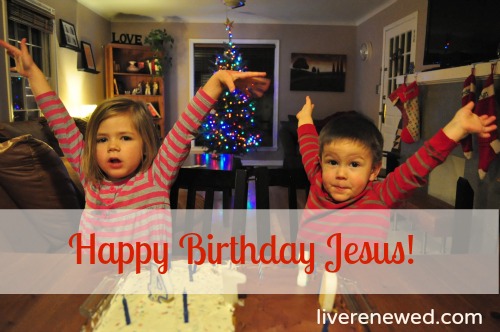 Oh, this is the hardest one, isn’t it?! No Santa??! How could we? But, we decided when our daughter was still a baby that we were not going to include Santa in our Christmas celebrations. In fact, when our daughter was 15 months old she called Santa, “Noah”, because that was the only man she knew with white hair and a big white beard.

Not doing Santa means that we don’t have to keep up with the story of making our kids believe that Santa is real, year after year. There’s no judgement from me if that is something that you choose to do, but we have let that go, and I feel like it has made our Christmas simpler.

Now of course, our kids both know who Santa is, and are obviously drawn to the idea of him. We were watching the Macy’s parade on TV on Thanksgiving morning with all of the build up at the end for the arrival of Santa, and the kids were so excited.

But there was something the announcers said that gave me pause, it was basically that every different country and culture around the world loves Santa, and that he unites us together and lives in all of our hearts. Wait a minute? Isn’t that Jesus’ place? Isn’t that what we want our kids to learn and believe about Jesus, not Santa? And as Jen said in her post,

For a five-year-old, how can Jesus compete with Santa? Our children don’t have spiritual perspective; when faced with the choice of allegiance, they have a baby in a manger, or they can get a jolly, twinkling, flying character who will bring them presents. This is going to be an easy choice for them.

So, we don’t tell our kids that Santa is not real, because they are young enough that we don’t want them to say something impulsive and ruin it for their friends. What we say  in our family is that we celebrate Jesus at Christmas, not Santa. And when our kids are asked about Santa from everyone around them they can just simply answer, “We don’t celebrate Santa.” And if they want to say more about it than that, it’s up to them.

Also, we haven’t yet talked to the kids about Saint Nicholas and explained who he was, the way that Jen talks about in her post. Because our kids are more and more aware and intrigued by Santa now, I think that is something we’ll definitely include for them this year.

I have to say that I am so, so grateful for the internet and all of the amazing ideas that abound for keeping Christ at the center of Christmas! I’ve gotten so many ideas from other amazing parents that I never could have come up with on my own.

Last year we used The Truth in the Tinsel to read Bible passages and make ornaments that helped us to focus on waiting for the arrival of Baby Jesus. We didn’t do one everyday, because that was a little overwhelming to me (remember how uncrafty I am), but the great thing about the book is that it has alternate schedules so you can still get so much out of it even if you aren’t able to use the book every day.

I also really like the idea of doing a Jesse Tree, but that requires more planning then I’ve been able to put in recently, with being pregnant last year and having a young baby this year. I really love The Truth in the Tinsel so much that I think we’ll save the Jesse Tree for when the kids are a few years older.

Last year, I found the idea of Shephard’s Pouches on Pinterest and would love to start this tradition with our family this year!

And last but not least, since the kids love celebrating birthdays so much, and of course also love cake, we started a tradition of making a birthday cake for Jesus on Christmas Eve last year. It was a huge hit last year and we can’t wait to do it again this year.

So that’s a little bit about what we are trying to do as a family to keep Christ in front of us as the reason that we celebrate Christmas.

Now it’s your turn, I’d love to hear what traditions you have established for keeping your focus on Jesus throughout the Christmas Season, or if this is something that you have struggled with. Let’s have a respectful and meaningful conversation in the comments. I can’t wait to hear your thoughts!

Read all the posts in the Simplify the Season series.

*Disclosure – There are affiliate links in this post. If you make a purchase through one of my links, I’ll receive a small commission. Thanks for supporting Live Renewed!