You guys. I cannot tell you how excited I am about this! If you’ve been around here for very long you’ve heard me talk about how un-crafty I am. I really am just creatively challenged. But, I have a deep desire to be creative, to create stuff with my hands, and to make beautiful things. Usually I just kinda push that desire down because I realize that things never really work our for me like I plan, or look the way that they do in the Pinterest pictures!

Until yesterday. I have some old sweaters that I’ve had sitting around for at least a year, maybe longer, intending to make pillow covers with them. I finally busted out the sewing machine and decided I was going to try to make it work.

As usual, things did not go exactly according to plan.

By the time I got my sewing machine, found the plug and pedal, and the manual, it had already taken me a half an hour. Then I had to remember how to wind the bobbin, thread the needle, and pull up the bobbin thread. Basics, I know, but it’s been a long time since I pulled that puppy out!

I was excited because I thought I was finally all ready to go! But when I tried sewing the thread just got all tangled up and the needle got stuck.

Oh yes, I remembered, it did this the last time I tried to sew something and I couldn’t figure out how to fix it. That’s probably why I haven’t tried to use it in so long (or that’s what I’m telling myself). Bummer.

But this time I had the manual, so I looked through it, tried cleaning off some of the parts, and Viola! It worked again. Hallelujah! Time to get started.

I won’t write a tutorial for you, because I’m the last person on Earth who should be doing that. I will though, walk you through what I did, and mistakes I made, in case you want to make sure you don’t do what I did! I wanted to make a sweater pillow cover, but I also wanted to make it an envelope cover so that I can take the cover off and clean it if I need to, which is likely in a house with three little ones and a dog.

So, I combined two tutorials that were just waiting for me on my crafty Pinterest board, this one for sweater pillows, and this one for envelope pillows. And this is what I came up with.

First I cut off my sweater right under the armpits, and then cut off one of the side seams to make a long piece of fabric. I was lucky that I had an old pillow that was pretty much exactly the right size. 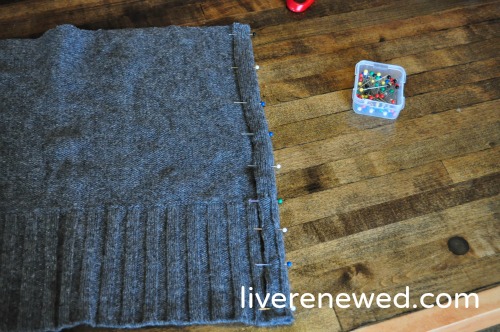 I folded over one side about a 1/2 in and pinned it down to make a clean edge.

Then I sewed two straight lines (okay, not quite straight, but I’m thankful that sweater material is pretty forgiving), on each side to make clean edges, and I cut off the extra sweater along the longer side.

With the right side of the sweater facing up, I then pinned the edges together (wrong-side out) at the top and the bottom to make my envelope opening, and this is where I messed up. As you can see, I pinned it with the shorter side on top, the way that I wanted my envelope opening to be. Because you turn the cover right-side out to put it on the pillow, that means that on the finished pillow my envelop is backwards (if that makes sense). The short side is on the inside next to the pillow and the long side is on the outside, so it doesn’t fit quite right. But again, it’s okay because sweater material is forgiving, thankfully, and I have a few ideas to fix it.

If you’re going to try this, don’t make the same mistake as me, pin the shorter side of the envelope inside the longer side.  Basically you want the envelope to be backwards when you’re pinning the fabric wrong side out.

Anyway, so I sewed a seam along each of the two edges, but because the sweater material was so thick at the end where the flap is, I ended up having to finish one of the seams by hand because it kept getting caught in the sewing machine.

So, here’s my finished pillow cover, inside out. Again, see how the envelop opening is on the top, you want that to be the other way, with the short side underneath.

And here’s my pillow! It’s not perfect, but I MADE it! And that makes it beautiful to me!

Here’s the way the envelop flap looks on the back side, see how it’s loose and baggy? 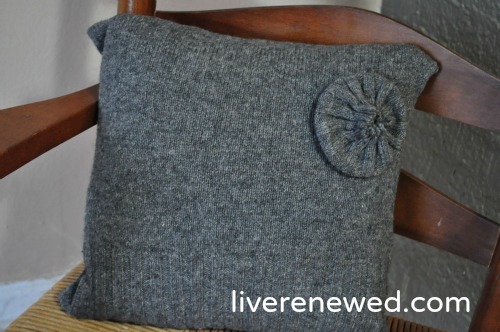 I even added a little embellishment! Ha! How about that! And I’m planning to fix the envelope flap by either sewing in the sides a little bit on each end to make the opening smaller and gap less, or by adding a few buttons along the edge (except how in the world do you sew buttonholes?!) or maybe just toggle buttons with little loops of fabric would be easier.

And I have a couple more sweaters just waiting for me to do this again!

I hope I’ve inspired a few of you who consider yourselves un-crafty, like myself, that you can make something yourself and it can actually turn out okay, and be fun! And for those of you who are much more crafty that I am, try not to laugh too hard at me. 😉

What crafty project have you worked on recently?