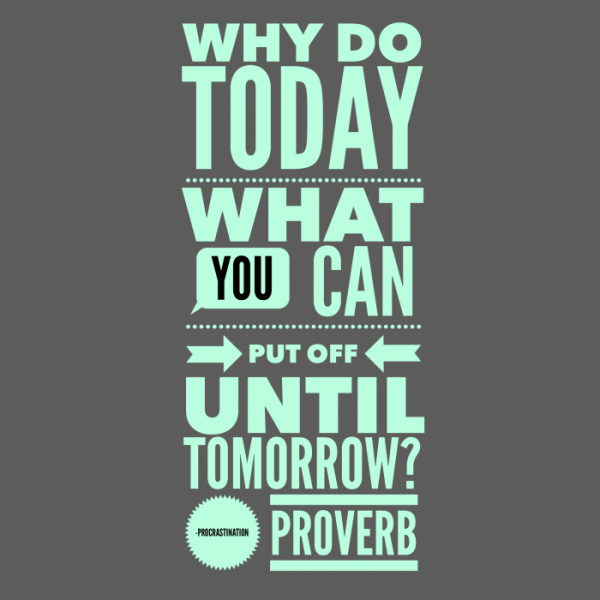 Why do today what you can put off until tomorrow?  -Old Procrastination Proverb I learned from my Dad

I look around and notice a few things strewn about on the living room floor, left over from the post-soccer practice bedtime rush for the kids. The dining room table is still covered with crumbs from the day. In the kitchen, the dishwasher door sits open, left that way after loading the dinner dishes. As I get up and move toward the bathroom I see a laundry basket with the day’s laundry ready to go downstairs and into the wash.

“I’ll do it tomorrow,” I think to myself as my eyes pass over each thing to be done. “I don’t have much on my schedule tomorrow, so it will be no big deal to do it tomorrow.”

Fast forward to the next morning…

My alarm goes off at 7:00am, I’m hoping to have some time to fit in a workout before my kids get up. But as I open my bedroom door and look out into the living room I see three mischievous, but oh-so-cute, faces looking back at me from the couch. They have been sleeping in lately and I didn’t expect them to be up this early. My day is already not going as planned.

“Mom, I’m hungry!!” they clamor off the couch and follow me into the kitchen as I put water in the kettle to boil. This is going to be an extra cup of coffee kind of day, I can already tell.

Then my eyes settle on the still open dishwasher I failed to run last night before going to bed. Sigh. So not only are we running low on clean dishes, but we also can’t load the dirty dishes into the dishwasher right away when we’re done with breakfast. Now my late night decision to “do it tomorrow” doesn’t seem like such a great idea after all.

Now I’m already behind this morning and will probably spend most of the day just trying to catch up. Forget getting ahead and actually having a productive day, or finding time to do something I’d really like to do.

I have been a procrastinator for as long as I can remember. As an ENFP personality type, I have always said that the P is for Procrastination. But after many, many, many frustrating days due to my procrastination, I have finally had a realization that might just be what I need to change the way I do things from now on.

When I procrastinate, I’m not just putting something off right now in favor of something else. I am actually wasting the time it will take me to do it later.

Once I realized I was wasting my own time, and wasting my days away, by putting things off until later, saying “Oh, I can just do that tomorrow,” I knew that was not the way I wanted to live. If something needs to be done I want to be the one to choose when it gets done, not the other way around.

And so, when I’m tempted to say, “I’ll do it tomorrow,” I have to stop myself and ask, “Do I really want to do that thing tomorrow?”

The question is, am I purposefully choosing to do it tomorrow, or will it choose for me because it needs to be done? Is that how I will choose to spend my day tomorrow? Was there something else I had in mind to do, so I need to do this thing today, so I have control over my time and what I want to do tomorrow?”

I will be honest that I’m still getting into the habit of stopping and asking myself these questions when I am tempted to procrastinate. But I can tell that when I do, it makes such a difference. Instead of feeling like the things I need to do are wasting my time, I feel more in control of my day and what I want to do. I’m learning not to waste my day by putting things off until tomorrow.