Our family had a great vacation last week at our cottage in Northern Michigan. It’s one of my favorite places in the world, it’s so peaceful and relaxing. Now we’re trying to get back into the swing of things as my daughter starts school tomorrow and fall is just around the corner!

So, our garden this year has taken on a life of it’s own! Our original planting on Mother’s Day only yielded us one zucchini plant. A few peas came up, but I didn’t keep them watered consistently, so they just died off. It was really weird, but none of our other seeds grew at all.

But, our one zucchini plant has totally taken over! It is gigantic and produces more zucchini than we know what to do with!

Because Blair was born at the beginning of June, I just didn’t really worry too much more about the garden. We didn’t get anything else planted they way we had planned to. But I did notice that two plants had popped up in one of our beds that didn’t look like weeds, but looked like some kind of melon or squash. So I left them to see what would happen.

On the right-hand side are the melon and watermelon vines

It turns out that one of them was cantaloupe and the other was watermelon, which is so funny because those were two of the the other things I was considering planting! We figure that they must have grown from seeds in our compost. So crazy! We’ve harvested one cantaloupe that was really good, and one watermelon that was barely even pink on the inside – I guess we picked it a little too early.

Can you see the two melon? We have about 7 of them growing, I think! 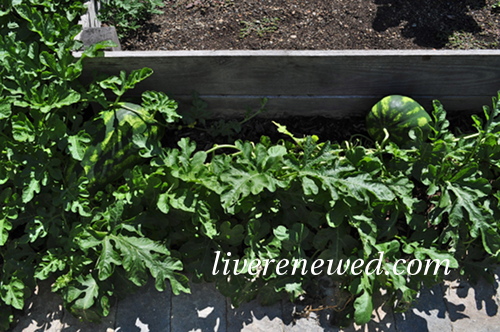 Here are two watermelon. We have about five of these guys growing!

So, now our garden consists of one gigantic zucchini plant, and two overgrown melon plants – a cantaloupe and a watermelon. We returned home from vacation to find 10 enormous zucchini, and a few smaller ones that we can actually use and eat, and still more growing.

They were so big he could barely hold them!

So that’s our garden this year. Nothing too exciting, unless you count the volunteer cantaloupe and watermelon plants. We’ll just have to wait and try again next year!

How is your garden growing this year?