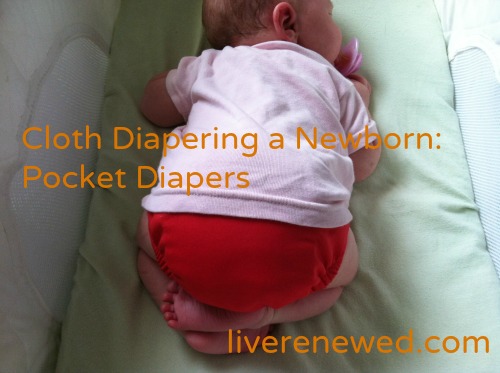 Last week, we talked about using prefolds and fitted diapers on your new baby, and today I want to share the other type of diaper I would recommend for a newborn baby, the pocket diaper.

Pocket diapers are really easy to use and are great for when you are going out and about with your baby. They are easy to carry in the diaper bag and just as easy to change as a disposable!

There are lots of different brands and styles of pocket diapers out there, but the basic idea is that it is a diaper shell, with a waterproof outer layer, a stay-dry inner layer, and a pocket in the back that you stuff an absorbent layer into.

Most pocket diapers come with a microfiber insert, which are nice and trim, while still being absorbent, but I also like to stuff pocket diapers with a prefold for more absorbency (one more reason prefolds are so versatile!).

The diapers have either aplix (Velcro) or snap closures, so once the absorbent layer is stuffed inside the diaper, you put in on the baby pretty much just like a disposable.

I used Fuzzi Bunz xs snap pocket diapers, that I bought used, with Blair, and I had a good experience with them. The pocket in the back is a little small, so they are kind of tight to stuff because the diapers are so small. Also, they don’t have a snap down in the front for the umbilical cord, but I found that the rise was low enough that they didn’t rub against Blair’s cord. She started wearing them when she was just 5 days old.

I also found that they were generously sized. She just recently grew out of them at about 10 weeks old, but she is on the petite side for a baby, my other chunky babies probably would have grown out of them much sooner. I’ve also heard good things about the Rumparooz Lil Joeys pocket diapers, which do have a snap down in the center, but I’ve also read that they run small and don’t fit for as long.

How to Use a Pocket Diaper

Before putting a pocket diaper on a baby, you need to make sure it is stuffed with an absorbent material. Use a microfiber insert, or a prefold, and stuff it into the back pocket of the diaper. Adjust it to make sure it is lying flat, not bunching up anywhere.

Lay the baby on top of the diaper,

bring the front up and the sides around and snap (or velcro) the sides into place.

You can either stuff the inserts into the diapers as you need them, or you can stuff them all at one time when they come out of the wash, making it easy to just grab a diaper and put it on, without having to stop to take the extra step of stuffing it first. You can also throw pre-stuffed pocket diapers into your diaper bag for easy diaper changes on the go!

One advantage of pocket diapers, over the similar all-in-one diapers, are that they are easy to wash and dry. Because the absorbent layer is removable, they don’t take a long time to dry in the dryer.

Also, once the absorbent layer in stuffed into the pocket, the diaper is basically all one piece, and easy to put on a squirmy baby, as opposed to prefold and fitteds, which require two layers – the diaper and the cover.

I found that with using prefolds and fitteds with covers, and pocket diapers on my newborn baby, that all of my cloth diapering needs were covered.

Do you use pocket diapers? What is your favorite style or brand to use on newborns?

Read all the posts in this series:

And I’m sorry I’m a few days late announcing the Zen Society Giveaway winner, but the winner is Rita Gorbics, [email protected] Congratulations! I’ll be sending you an email soon!