The other day I was out running when I saw a big sign in the back of a car that said, “Pray to End Abortion!”

I stared at the back of that car as it drove down the street away from me and I couldn’t help but think, ‘Isn’t that kind of missing the point?’

Don’t get me wrong, I am morally opposed to abortion. I believe in the sanctity of human life and I believe that all life should be protected and cherished, especially the lives of those who have no voice to advocate for themselves.

I also completely and totally believe in the power of prayer, and think that we should be praying about everything in our lives – big and small – our lives matter to God. And I do believe that prayer changes things.

But a sign that says, Pray to End Abortion? I’m at a point in my life where I’m just not even sure what that means?

I’ll tell you what it used to mean to me, though.

I was raised in a conservative, evangelical Christian, Republican  – and whatever other labels you want to slap on there – family. I love my family very much and am extremely thankful for my amazing parents who, I believe, were doing the best they could, just like we all do. But, there are some things I was taught, or maybe not so much taught but just picked up through watching and listening (the way most kids learn about life!) that I am beginning to question now.

My family was very Pro-Life – we were told from a young age that abortion was killing a baby, that life begins at conception, that God values all life, especially the life of an unborn child, and that one of the most important political issues was to end abortion and possibly even to overturn Roe vs. Wade.

My dad was especially active in the pro-life movement. He was a pediatrician, so of course, he loved and valued babies from their very beginning. He used to tell me when I was pregnant with each of my three kiddos, “There’s nothing more beautiful to a pediatrician then a pregnant lady!” He volunteered his time at the local crisis pregnancy center, and raised money for them by participating in their Walk for Life every year. He was a champion for the Pro-Life movement.

If you’re relatively new around here, you may not know that my dad passed away almost two years ago, and I want nothing more than to live out the legacy that he left for me in valuing and fighting for human life.

So if I would have seen the “Pray to End Abortion” sign when growing up, or even in the last few years, I would have said that it could mean a couple things.

• It meant pray that pro-life politicians would be elected who would nominate conservative pro-life judges who would overturn Roe vs. Wade.

• It meant pray that pro-life politicians would be elected so they could pass laws limiting access to abortion and increasing regulations for abortion clinics. Or maybe even laws like keeping a database of women who have had abortions, like recent law proposed in Louisiana.

• It meant pray that abortion clinics would be shut down and closed.

• It meant pray for evil Pro-Abortion people who believe it is okay to kill a baby, to murder a child, that they would be convicted of their wrong thinking and realize that a fetus is not just a blob of tissue that a woman can do whatever she wants with, but an actual human child.

This is what I would have thought when I saw a Pray to End Abortion sign.

But I’ll also tell you what it didn’t mean to me.

• It didn’t mean pray for people to come alongside, helping, supporting, even rescuing women who, in the midst of their unwanted pregnancy, feel like they have no other options except to get an abortion.

• It didn’t mean pray and ask God how I could personally help to stop even one abortion by offering hope and love and support to a pregnant mother who felt like abortion was her only option.

For so many years, abortion was a ‘That’s their problem’ kind of issue to me. I claimed to be pro-life and I would have told you abortion was wrong, but it wasn’t something that really affected me.

In fact, I would have told you that all people who were pro-choice, or even voted pro-choice, believed it was okay to murder a baby, thought that human life wasn’t valuable, believed that women could do with their bodies whatever they wanted.

I even believed (and I am so ashamed to admit this right now) that women who got abortions were villainous, that they wanted to kill their babies. That women who had abortions did it because having a baby would be inconvenient. That a pregnant mother didn’t actually believe she was carrying a child.

I did not view women who got abortions as victims, whether of an abusive husband or boyfriend, of deceitful and greedy doctors and clinics, of systemic poverty, of rape or incest, or many of the other situations and circumstances surrounding a women’s decision to get an abortion.

I pictured middle-class working feminist women who believed it was their choice to do with their bodies what they wanted, regardless of the life of their child. And again, I am so ashamed this was my worldview until very recently.

The issues surrounding abortion came flooding back to me last year when I read for the first time about the Kermit Gosnell case. It was horrifying and truly unbelievable to read and hear stories from this abortion clinic in Philadelphia where women were treated like scum and babies were killed after being partially born. And for a few weeks I poured over just about every article and blog post I could about this sensational news story.

And you know what happened? My eyes were opened and my heart and my mind were changed. 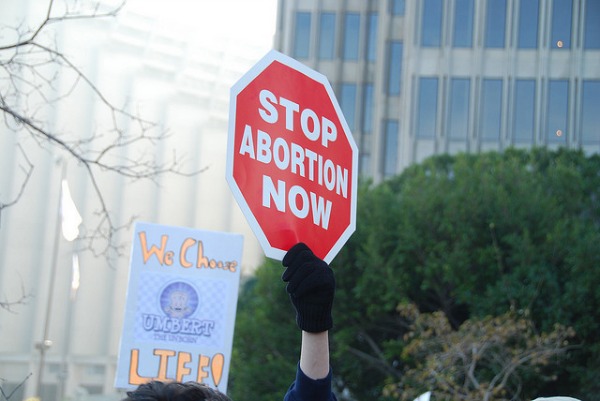 The Pro-Life stance, as I understood it then, reeks of privilege. As if everyone who chooses to have an abortion does so just because they want to kill their baby. It cares more about saving the life of the unborn child then of saving the mother from the situation and circumstances surrounding her, her pregnancy, and the decision she is making.

It cares more about limiting access to birth control and discouraging abortion by making it harder to get, instead making it easier to have and raise the child.

It does not take into account issues of poverty, race and ethnicity, abuse, injustice, limited access to education and health care, family and work circumstances, that lead to a woman feeling like she has no other choice. The reasons behind why a woman chooses to have an abortion.

Are there still women who get abortions because their pregnancy is inconvenient? Yes. Are there pro-choice people who do believe in abortion on demand and don’t value the human life of the baby. Yes.

But that is not the total stereotypical picture of women who get abortion or people who believe in giving women a choice. Because what I found in my reading about the Gosnell case was that in many ways pro-life and pro-choice people are not so different as we assume we are.

Many pro-choice people absolutely do value human life, and they look at the picture as larger than just the life of the unborn baby, and include valuing the life of the mother as well.

Many pro-choice people understand that women who have unwanted pregnancies are going to get abortions no matter what, so they actually believe in reducing abortions by increasing access to birth control, early pregnancy detection, health care, even the morning after pill – things that many on the “pro-life” side oppose, even though these things can actually reduce the number of abortions.

Today as I ran by the same house, a car parked out front had a sign in the window with a picture of a baby’s face that said, “Face It: Abortion Kills A Person.” So all of these thoughts came flooding back into my mind I continued on my run thinking about what it truly means to be pro-life and how people who believe in the sanctity of all human life can actually make a difference.

A Change of Heart

As long as the pro-life movement only focuses on ending abortion and stopping abortion they are never actually going to get anywhere. If that is the focus then they see abortion strictly as a political issue and politics is NOT the way to fight this battle. We’ve been doing it that way for too many years, and it obviously just isn’t working.

As I am coming to understand and be convicted, being Pro-Life is a heart issue, and it starts with valuing every life of every person who is made in the image of God. The only way that we can truly be pro-life is to value the life of the mother as much, or in some cases, maybe even more than we value the life of the child.

Because it is by rescuing the mother from her situation and circumstances that we will truly be able to save the life of her unborn baby. And it’s not just about the woman’s decision to have the baby instead of aborting him, it extends to supporting the mother and the child long after the child is born.

It considers our responsibility to help end abortion in tangible ways – becoming adoptive and foster parents, supporting women facing unwanted pregnancies, showing grace and mercy to those who have previously had abortions. It’s not talking about the issues surrounding abortion as if the pregnant woman isn’t even part of the picture at all.

But getting involved in a woman’s life and the life of her child is messy and will take our time and effort and energy, it’s not as simple as praying to end abortion, or even marching in front of an abortion clinic with signs about how evil abortion is.

We need to pray, yes. We need to pray for the mothers, the often young women, who are under unbelievable circumstances and they are being preyed upon by men in their life, by the doctors at the abortion clinics, and even by people who claim to be pro-life.

And I pray if you are a pro-life Christian that you will also challenge the ingrained stereotypes, beliefs, and worldview that you hold in regard to abortion, women who have abortions, and those who who are pro-choice.

And then, together, we need to be committed to come alongside the mothers, and value their lives and treat them with the dignity and respect that they deserve as a beautiful person made in the image of God. We need to be pro-their life – we need to be their rescuers, getting involved in their lives, helping them in the midst of their circumstances, providing them with other options and supporting them in their decision, whatever that may be.

Because, face it, behind every baby who is killed by abortion is a woman whose life deserves to be valued too.

“Give justice to the poor and the orphan; uphold the rights of the oppressed and the destitute. Rescue the poor and helpless; deliver them from the grasp of evil people.” Psalm 82:3-4

Further Reading: This post by Rachel Held Evans says so much more that I want to say, but this post is already SO long.