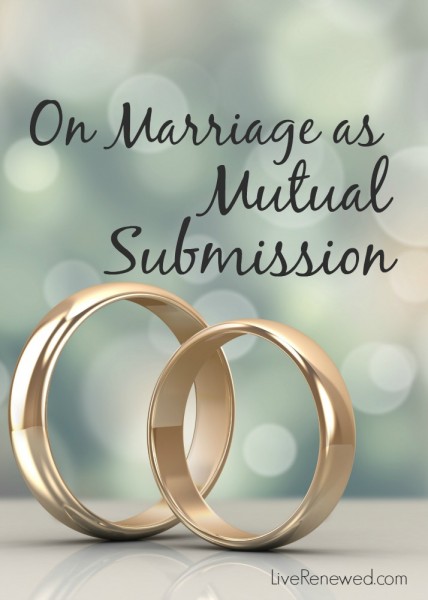 After my post last fall about the lessons we’ve learned in 12 years of marriage, a reader asked if I would expand on my thoughts about being equal partners in marriage. I must admit that I am a little nervous about this post, because I realize people on both sides of the issue hold strong ideas and opinions. And I don’t pretend to be an expert or have all of the answers.

No two marriages are the same and there is no one perfect formula for a happy and fulfilling marriage. However, I truly believe that our shift toward becoming equal partners has been essential in helping to heal and restore our marriage. Because of this belief, I decided to take the risk of sharing our experience with you. I recognize the importance of sharing our stories and experiences in order to provide hope and encouragement to others who may be going through similar situations.

If you are a Christian, you are probably familiar with two alternative views of marriage found within most Christian cirlces. On is the view of male headship and female submission, of separate but equal roles within the marriage. The other is the view of spouses mutually submitting to Christ and to one another, no spouse being above the other within the marriage. For the sake of this discussion we’ll call these views male headship and mutual submission respectively.

Jer and I are both first-borns, with strong opinions and stubborn personalities. You can imagine how well that goes sometimes! When we first started dating he called me his “fiesty feminist”. But Jer has always said that my strong opinions and personality is one of the things he really loves about me.

Although I was raised in a strong Christian home, I was not specifically taught one of these views of marriage over the other. So, for the first several years of our marriage we did not follow either of these views intentionally. I would speak my mind and Jer would speak his. We each brought different ways of communicating and conflict resolution from our families of origin to our relationship. We were newly married and hadn’t yet learned how to fight well and fair. We definitely had trouble communicating effectively.

Then add to that typical life challenges. There was financial stress, unemployment, being pregnant and having a new baby (twice), trying to sell a house during a down market, new jobs, living with extended family, moving to a new home, and a parent with cancer. We were not connecting well, and were not on the same page about things, so we hit a really hard and rocky time in our marriage.

Soon after, I was introduced to the idea that a “Biblical” wife was supposed to submit to the leadership and authority of her husband. Jer and I attended a marriage conference that touted male headship as God’s will for marriage, the way that God required and expected a Christian marriage to be.

Attending the conference did help to open up lines of communication in our marriage in a helpful and important way. But after the initial “high” of the conference, we fell back into the old habits of our relationship along with this idea that the man was leader and the woman needed to submit to his leadership.

As I looked at the struggles within our marriage, I thought one of the main issues was that I wasn’t submitting to my husband the way I was supposed to be. I began to believe and try to practice being a “good Christian wife” by submitting to my husband. To me this meant that I was supposed to step back on decisions like our finances, raising our kids, and involvement at church, among other things. Giving Jer the space he needed to lead. In response, I expected him to step up and lead in all of those areas, and more.

And while I was trying desperately to mend our marriage by following God’s “will”, life crumbled down around us, or around me anyway. My dad passed away and six weeks later I had our third child. In the midst of grief, sorrow, and postpartum hormones I spiraled down into a deep, dark place. I was struggling to just make it through each day. I could not keep up with the demands of our children, home, and life in general. I felt so guilty that I wasn’t being the “good wife” I was supposed to be.

But at the same time, Jer felt like I was throwing everything on to him, expecting him to carry it all on his own, including my emotional well-being. I guess in a way, I was. I believed he was supposed to bear the full responsibility of our family and home. And I became bitter that he wasn’t “leading” the way I expected him to.

The results of this shift to a male headship belief system within our marriage were disastrous. Instead of strengthening and growing our relationships with each other and with God, it led to bitterness, anger, distrust, guilt, shame, and unrealistic expectations.

Instead of speaking up and speaking my mind, I would bite my tongue and defer to Jer’s leadership. The bitterness that resulted caused me to became critical and judgmental of Jer. In response, he pulled away and our lines of communication deteriorated even further.

I realize that some people may say I was doing it wrong. That I was “submitting” the wrong way, or with a bad attitude. But honestly, I didn’t know how to do it any other way. It didn’t come naturally to me or to our relationship. I do understand that headship and submission looks different for different couples, and that it does work for some marriages. I’m okay with that. But, I think it becomes an issue when it is taught as God’s “will” for marriage, or as the right and only way to have a “Biblical” and “good” Christian marriage.

And I believed this was what God wanted and expected me to do, that I needed to submit to my husband. I asked God to help me submit. I strained and tried, and then tried some more. It was exhausting. At the same time, Jer was also straining under the expectations of headship, which I now understand he was never meant to carry on his own.

While trying to live out this cycle of headship and submission, I began a journey of healing from my grief and depression. I began to see a light at the end of the tunnel and to pick up the pieces of my broken heart and overwhelmed life. As a part this healing and personal growth, I read books like Jesus Feminist, Half the Church, and A Year of Biblical Womanhood.

I distinctly remember the night I was lying in bed reading Jesus Feminist and realized what I had done to our marriage. I was heart broken over the damage I had caused to our relationship by embracing the male headship belief system. I had completely let Jer down by expecting him to carry the weight and responsibility of our relationship and family all by himself. I wasn’t being the partner and co-laborer I had promised to be on our wedding day. And that failure on my part was seriously damaging our relationship.

The next day, I prayed and reflected on this realization, and I knew I needed to talk to Jer about it. I had so many thoughts, so many questions, and I wasn’t sure how he was going to respond. I began by apologizing for the role I had played in trying to move our marriage toward male headship and the negative results of that choice. I asked for forgiveness, which he graciously gave without hesitation.

I asked him if it would take anything away from him if I no longer held him up as the leader of our marriage and relationship, but if instead I came alongside him as an equal partner. “No,” he replied, “not at all. In fact, if you do that, you will actually lift that burden from my shoulders and give me freedom in not having to carry it alone.”

I began to read, pray, listen, and study all I could. The Spirit moved and worked in my heart and mind in ways I hadn’t anticipated. I had thought I knew what God’s “will” was for our marriage. But He was showing me a different way.

This was going to require more of me. It would be easier for me to stay back, to remain passive, to “submit”, to let the responsibility of our marriage and family and life fall on my husband’s shoulders. God was revealing areas where I needed to step up, and I shared what I was learning with Jer.

I know that some may say that Jer is just not embracing his role as the husband and leader. That he needs to be a “stronger man” and lead his family and that is why I had issues with submitting to him. But if you don’t think my husband is a strong man, then you obviously don’t know him very well.

God was leading both of us out of the pain and guilt that headship and submission had caused in our marriage. He is leading us into a place of healing and restoration as we submit to each other and to Jesus as He leads our marriage and our family.

I asked Jer recently what he thinks has been the biggest change for us and he said that now we both have, and give to each other, the freedom to fully be the people God created us to be. Our communication is better, more open, and deeper then ever before and we can get on the same page, be on the same page, and stay on the same page more easily and more often now.

The problem is not that he isn’t a strong man or that I am too strong of a woman. The solution is that we both have strengths and weakness that actually fit together in the most beautiful and meaningful way when we each defer to the other in the ways we are weak, and stand up and lead in the ways we are strong. We’re definitely not perfect at it. We’re still learning to lead well and to submit to each other humbly and gracefully.

But we are doing it together, as two-becoming-one.

Because I am not an expert and have learned and grown so much from the writings and teachings of others, I want to share some resources if you would like to read and learn more about mutual submission for yourself and your marriage.

Christians for Biblical Equality has a wealth of information and resources.

I strongly recommend the books I mentioned in this post – Jesus Feminist, Half the Church, and A Year of Biblical Womanhood.

If you don’t have time to dive into a book right now and want to read some good articles, here are some to start with.

From Rachel Held Evans, author of A Year of Biblical Womanhood:

And from Sarah Bessey, the author of Jesus Feminist:

This sermon from Greg Boyd of Woodland Hills Church was also really powerful for us.